Every weekend I do food prep for the week ahead. There are a couple of things that I make every weekend because they go in Jackson’s cooler for daycare each day, almond milk and egg muffins; and then I typically make at least one meal that will have leftovers and one big batch of something in the crockpot that we can eat for a few meals during the week. If I’m really planning ahead, I’ll also prep something that I can take to school for lunch so that more of the leftovers from dinner can be used for another meal at home.

Typically, Friday night dinner is whatever is left in the fridge. This Friday, though, because I had managed to go grocery shopping during the day, I actually made a really nice (but extremely simple) dinner. I’ll start with that recipe and then move forward throughout the weekend.

Friday night: Pan Seared Scallops with Roasted Green Beans (I don’t make that much seafood, because Mike doesn’t like it, but since he was out of town, Jackson and I got to eat some delicious scallops.)

There isn’t really a “recipe” for this meal. I roasted some green beans with olive oil, garlic salt, and pepper at 425 for about 20 minutes.

On Friday night I took some pork shoulder and some chicken breasts out of the freezer in anticipation of the cooking that I planned to do over the rest of the weekend. I also soaked about 3 cups of raw almonds in water overnight because I wanted almond milk in my coffee on Saturday morning, and I had used the last of it for Jackson’s cooler on Friday.

On Saturday morning I made the almond milk. Although my inspiration for the almond milk I make every week comes from this recipe from Nom Nom Paleo, I don’t measure anything, and I always use at least 2-3 cups of almonds so that one batch can get us through the week.

3-4 cups of water, plus extra to soak the almonds

a splash of vanilla extract

a dash of sea salt

Soak the almonds overnight in a large bowl or pitcher. I use a pyrex measuring cup.

Strain the almonds, rinse them well, and put them in your blender. I have a Vitamix, and it works very well for this application (as it does for everything).

Add 3-4 cups of water, vanilla, and salt to the blender. PUT ON THE LID (please don’t forget this crucial step), and blend on high for about 2 minutes.

ou have to strain out the almond meal. I use a nut milk bag for this, but cheese cloth works fine as well. Pour the blended milk into your bag, and squeeze the milk out into a pitcher. You’ll have to use some muscle here, but it’s definitely worth it.

You’ll be left with almond meal, and I know that some people dry this out at low temps in the oven and use it for almond flour, but I’ve never been quite this motivated, so I just throw it out.

The resultant milk is creamy and delicious, and it keeps in the fridge all week. I’d imagine it would last up to two weeks, but we always use it up faster than that.

For Saturday night dinner, I made some pork meatballs with spaghetti squash.

I hacked the spaghetti squash in half with the amazing cleaver that I got for Christmas and popped it in the crock-pot on high for 3 hours.

For the meatballs, I used about 2.5 pounds of a pork shoulder that I had in the freezer. After thawing it, I cut it into approximately 1 inch cubes. I laid the cubes on a baking sheet covered with parchment paper and put them in the freezer for about 30 minutes. Then I put the meat into my food processor to grind it. I did it in 4 batches so as not to overfill the food processor. It ended up being a nice coarse grind, which I like for meatballs. 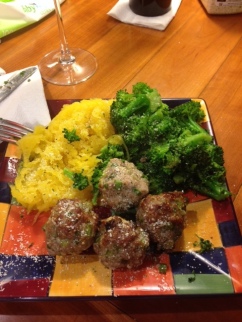 Using your hands, mix all the ingredients together in a big bowl. Once the ingredients are thoroughly mixed, form into balls and place on a rack on a rimmed baking sheet. I ended up with 28 meatballs. Bake at 425 for 20-25 minutes.

I served with spaghetti squash and broccoli, and it was an amazingly delicious meal. There are also plenty of leftovers for lunches early in the week.

On Sunday morning, before I even made breakfast, I got the crock-pot going with dinner for that evening: Hatch Green Chile Chicken.

I made a version of this dish a couple of weeks ago and was astonished by how fantastic  (and extremely easy) it was, so I decided to make it again and write everything down this time. A few months ago, I had bought a package of frozen hatch chiles at Trader Joe’s witho

ut even really knowing what they were. When I made the first incarnation of this meal, I just tossed some chicken thighs and these chiles in the crock-pot and hoped for the best. As I said, it turned out great, and I got a lot of mileage out of that batch, using the leftovers for enchiladas a few days later.

Put onions and garlic in the bottom of your crock-pot. Add the chicken. Add spices evenly over the chicken. Pour in the pico and the Hatch chiles. Cook on low for 8 hours. See, super easy. 🙂

And the last thing I made on Sunday was a batch of egg muffins. I make these every week, and send two each day for Jackson’s breakfast. He loves them, and it makes prepping his food each night for the next day that much quicker.

There’s no real recipe for these: I just beat up 12 eggs with some salt and pepper and pour them into my silicone muffin cups. This time, I added some crumbled bacon that was left over from breakfast, and also a little bit of shredded cheese that we had in the fridge. I baked them for 25 minutes at 350, and that was that.

So while that may seem like a lot of food prep to do over the weekend, I know that we’ll make it through Tuesday with leftovers (I hope).

Oh, and one more thing that I did was to chop up a bunch of bell peppers, onions, and carrots to add to my canned salmon for lunches at school. That way I’m sure to get some veggies in during the day.

Have a great week!